Two years ago we had a pool guy who would look after the pool for us and keep an eye on the pH and chlorine levels. He’d buy in all the chemicals, hoover it, clean it and send us a bill every now and then. My parents were both still at work then and would only spend a few weeks here so it worked really well because the pool would be up and running for when they arrived.

Since they retired they’ve had all the time in the world to get their heads around the complexity of pool management and, to be honest, it’s not overly complicated but there has been a bit of a learning curve (especially when all the instructions on the filter and tubs of chemicals are in Portuguese).

The pool is generally left dormant from late Autumn to early Spring. We leave it to stand rather than draining it and wack on the ‘winter cover’ so that creepy crawlies and leaves don’t fall in. The weather was really good around Easter time so they decided to uncover it and see what lied beneath. From what we read online we estimated that it would take a week before it was safe to swim in but it took more like three weeks!

Over the winter the pool had developed it’s very own eco-system. It was a very deep green because it was full of algae and, despite the winter cover, also full of leaves and bugs. I forgot to take an initial picture but here it is after we scooped up the debris. The observant ones among you will notice that we also made a start on painting the back wall. 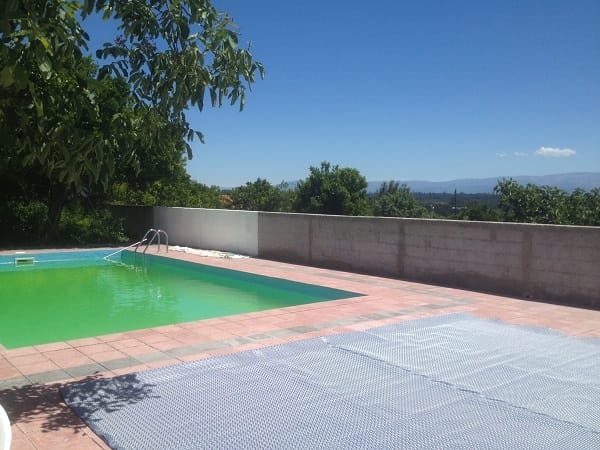 Now we started on our learning curve! First we cleaned the filtration system and then took a look at the pH and chlorine levels, which read as extremely acidic on the pH scale and nonexistent on the chlorine scale. We weren’t too sure whether we first needed to clear up the green algae or bring up the chlorine levels so we tried to do both! 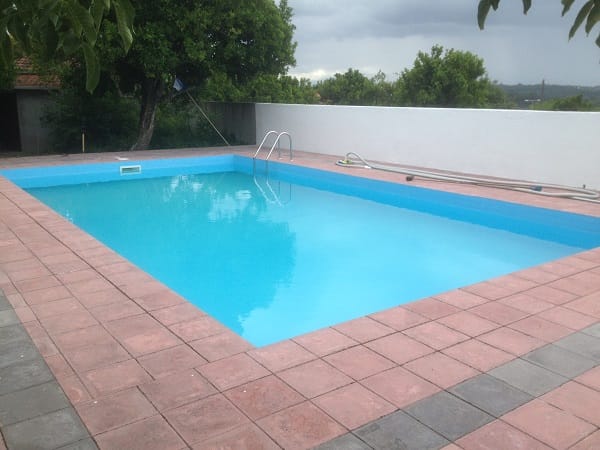 This resulted in a crazy chemical reaction and made the pool less green but extremely cloudy. We looked online and it said not to swim in it until you can see the bottom, so we hoovered it and scrubbed the sides but this didn’t make much of a difference to the cloudiness. We then did a pH and chlorine test, which showed that the pH was getting closer to neutral but the chlorine had been used up. Dad added another load of chlorine (700g) and waited another few days. There was no change, so late one evening we took the decision to overshock it and threw in 1.5kg. For a few hours you couldn’t go anywhere near the pool because it had a cloud of hydrochloric acid over it and the pool was bubbling (I’m not kidding)! We did another reading in the morning:

Chlorine is on the left and pH on the right. Ideally, read as between 0.6-1.2 for chlorine and 7.2 for pH. This shows that if you jumped into the pool then your skin would burn off, so lets not do that.

But… after a day or so, things changed dramatically!

Here the chlorine levels are spot on and the pH is still slightly low, but swimmable! The pool now looks like this:

It took near enough three weeks but we’re very happy with the result! What we’ve learnt from this was to treat the chlorine and algae separately because otherwise the chemicals just react together and not a whole lot happens. We also learnt that throwing in twice the recommended amount of chlorine isn’t the end of the world and seemed to have solved our pool problems. Although, we’ll probably find out in a few days that the filtration system has corroded… but the pool looks great!