I was wracking my brain over what to write during the in-between months that my folks were back in the UK and I ended up finding a handful of photos. They didn’t quite warrant a blog post by themselves but I could probably justify a blog post with them all thrown in. Why not, she says!

Each year we start off with a list of jobs that we want to complete for that year. My parents are ridiculously industrious and it is also a great way to keep focused. On that list for 2013 were things like:-

From the top of my head those were the ‘big’ jobs that needed completing and we were successful in all of those apart from the pigeons, but we don’t talk about that.

Earlier in the year we decided that we should have a wood burner fitted in the living room so that my parents could stay longer in the Winter months. We already had an open fire but it would always smoke the room out and would eat up the wood so quickly, so we opted to install a wood burner. We spent a long time trying to find one that would fit and in the end we had to take out a few bricks but it was worth it. Here’s the wood burner just before we put the door on and put it in place. 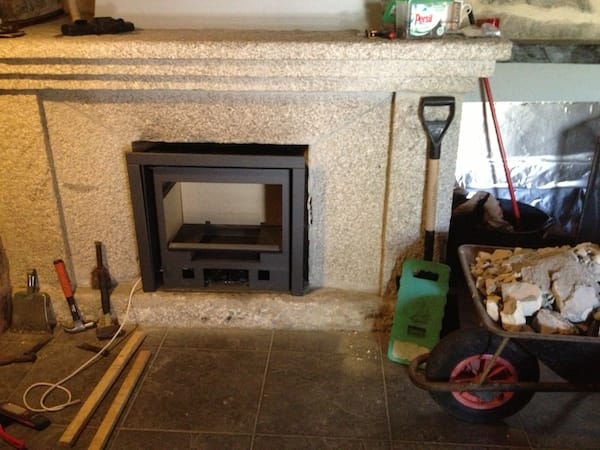 And here’s me lighting it: 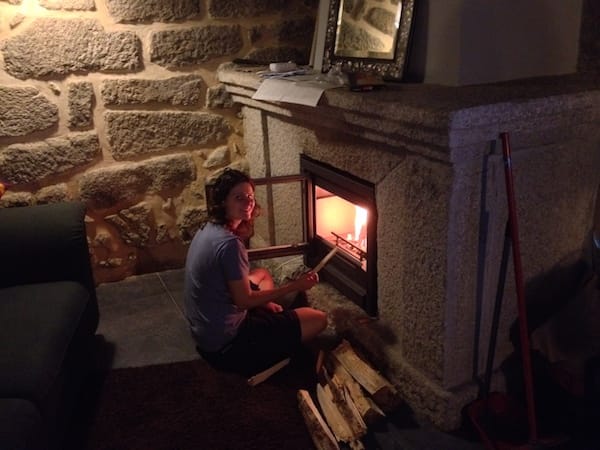 We didn’t want to spend a fortune on buying wood for it and we had a poplar tree that needed felling, so we opted on making our own firewood. So in October last year we had a couple of tree surgeons over to take care of the poplar tree and also prune back the fruit trees. We made a great deal with them – they do the cutting and we get to keep the wood for firewood, which they also cut down to manageable chunks for dad’s axe to chop through.

The huge poplar tree stands next to our pool room. One day that tree was destined to either fall on the house or our next door neighbours, it also blocked out a lot of sunshine. The lumberjack guys spoke to our neighbours, who kindly let us drop a massive tree in their garden. Here it goes:

Once again the health and safety of workmen in Portugal amazes me, they were just like the guys who put up our guttering. No hard hats, no assessment of the risks… they just crack on and get on with it. Efficient but crazy!

After the poplar was felled they then moved onto the fruit trees. We specifically needed our walnut and fig trees looking at. They hadn’t been pruned for many years and over time they became exceptionally bushy, which meant that all of the tree’s energy went into caring for the leaves and not on fruit production. So this year we had a very bushy fig tree with barely any fruit on it.

This pic was taken just over half way through pruning the fig tree. The lanky looking branch towards the top of the picture shows how tall the tree *used to be*.

When I arrived in December I was really shocked by how severely the trees had been pruned back – but they’re the experts! We’ll see how they recover next year. This was the fig tree afterwards:

Away goes all of the branches:

After this we stacked up all of the wood that we would use for the fire and allowed it to dry in the sun. Once a couple of weeks had passed we then used an axe to chop it into friendly sized pieces for our wood burner and then stacked it up for the following Winter. Dad and I took turns in chopping the wood (but really he did most of the work!):

I enjoyed breaking my gender stereotype by spending a few hours a day chopping wood and then stacking it all into this little gap.

It doesn’t actually look like a lot of wood here but it really is! It’s about 7 foot high (approx 2 metres) so I had to throw the last few bits of wood onto the pile rather than stacking it, so it lost it’s neatness unfortunately!

In the meantime, the pigeons were still increasing in number so we got a little creative with our battle tactics. We bought some sheeting and disrupted their flight path into the BBQ area.

We then hung some bright balloons to scare them off. Needless to say, the dogs weren’t too impressed because they love chasing the pigeons. It was an ugly fix but it actually worked – for about a month – and then the pigeons came back. They found gaps in between the roof beams and crept in between. Sneaky pigeons…

So those are the little things that I didn’t write about in the summer time. I don’t think it was too much to write home about. Needless to say, it’s a sure sign that my parents are enjoying their retirement when the biggest decision of the day was ‘which balloon colour is most likely to scare the pigeons?’ It’s a hard life…